On Monday, November 7, 2022, the opening ceremony of Perlen Packaging's new PVdC coating line took place in Anápolis. This is another milestone in the development of the Perlen Packaging Group. Back in August 2020, the CPH Group's Packaging division announced its investment in a new PVdC coating line. Due to the effects of the Corona pandemic, the worldwide restrictions in logistics and in the availability of electronic components, there were also delays in the construction and delivery of the new coating line. 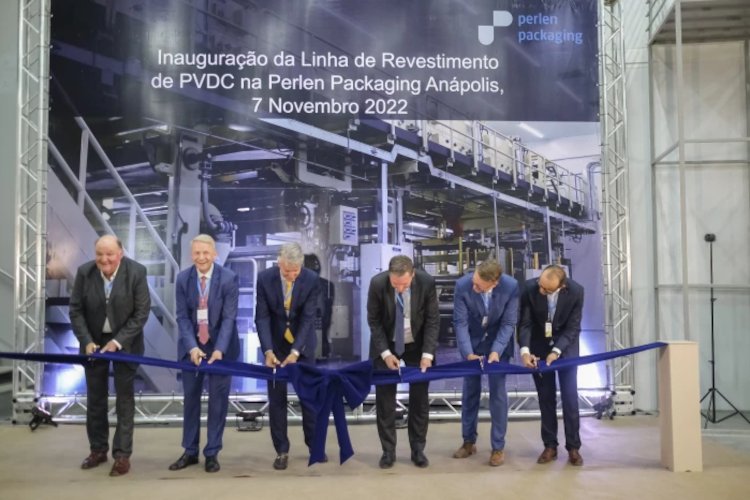 In order to achieve the targeted schedule in the best possible way, the processes were adapted and accelerated. For example, it was decided not to set up and accept the coating system at the manufacturer's premises, as is usually the case, but to carry out the acceptance and function tests directly at the factory in Anápolis. Likewise, shipping and transport were carried out under Perlen Packaging's own responsibility and direction.

On June 2, 2022, the entire delivery of 34 containers arrived at the Anápolis site in the province of Goias. In the following months, the coating line was set up in several stages. After extensive trial runs and the final factory acceptance test, the plant was formally released in the fall of 2022 and the necessary external audits by customers were scheduled accordingly.

The commissioning of the coating line was ceremonially celebrated on Monday, November 7, 2022, with customers, business partners and political representatives. For the official inauguration, the ribbon was cut by Mr. Peter Schaub, Chairman of the Board of Directors of CPH Chemie + Papier Holding, Dr. Peter Schildknecht, CEO of the CPH Group, Mr. Wolfgang Grimm, former CEO of Perlen Packaging, Mr. Marc Haller, CEO of Perlen Packaging, Mr. Cristiano Bueno, Plant Manager of Perlen Packaging Anápolis, and Mr. Joel de Sant'Anna Braga Filho, Secretary of Industry and Commerce of the State of Goiás.

The new film coating line is the Group's fourth large plant after the three coating lines in Switzerland and China. In line with its strategy, Perlen Packaging is thus present with its own coating capacities in the most important markets of the pharmaceutical industry in Europe, Asia and Americas.

Perlen Packaging's production facility in Anápolis is located in Brazil's second largest and rapidly growing pharmaceutical industry cluster. Many of Brazil's leading pharmaceutical customers are based in the immediate vicinity. Latest forecasts confirm the continued growth trend of the pharmaceutical markets in Latin America and predict an annual growth of 5% to 8% until 2026. Brazil itself, with a population of over 200 million, is the sixth largest pharmaceutical market in the world.