A new multihead weigher solution from Ishida is enabling a leading German logistics service provider to weigh and pack nuts, bolts and washers into cardboard boxes more quickly and flexibly than ever before. Hardware from the Würth Group enjoys an outstanding reputation. Its subsidiary WLC Würth-Logistik provides the primary packaging for more than 1,000 different products, with eight different pack types, fill weights between 40g and 4.5kg and quantities between 50 and 1,000 pcs per box.

The company had been using an Ishida multihead weigher since the late 1980s but while this machine was still in perfect working order, the company needed a new solution that was better able to cope with the growing trend towards smaller pack formats.“The primary factor behind our decision was the outstanding performance of the old multihead weigher, which had functioned reliably over decades of continuous operation,” explains Ingo Frank, who is responsible for plant technology at WLC Würth-Logistik.

The new machine, an Ishida CCW-RVE model, is capable of filling on average 45 boxes per minute, although this figure can be as high as 60 boxes when the weigher is operating at maximum speed. “We can fill up to 22,000 boxes per shift, which is an almost 20% improvement in performance compared with the previous system,” says Ingo Frank. With overfilling at less than 1%, precision is in no way compromised by these high speeds. 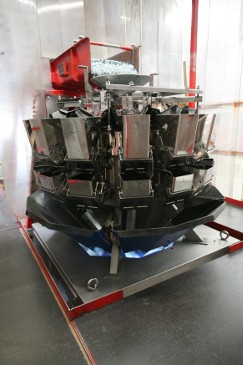 Another benefit, according to Ingo Frank, is the greater degree of flexibility. The new multihead weigher is much more accommodating in handling different pack formats, and frequent product changeovers can be completed very quickly by simply calling up one of the 1,000 pre-sets at the touch of a button.

The CCW-RVE features reinforced contact surfaces that can withstand the extremely hard and sometimes sharp-edged products manufactured by Würth. In addition, plastic coatings on the contact parts ensure that very small and light objects are reliably handled. This allows even challenging products such as tiny nuts and washers to be weighed efficiently. The plastic inserts also have sound-absorbing properties, while the completely smooth design of the contact surfaces means that items such as sharp wood screws do not get stuck or caught in the hoppers.

In addition to the CCW-RVE, Ishida also supplied the single-lane conveyor for the cardboard boxes. The system was up and running without any problems after just two weeks. The nuts, bolts and washers to be weighed are transported to the packing line using large, open containers. An elevator brings the containers up to the right height, and the products are poured onto a conveyor belt. From there, the hardware passes through an inlet chute onto the dispersion table of the weigher.

A load cell under the dispersion table optimises the amount fed onto the table, and vibratory radial feeder troughs transfer the items to the hoppers. The hoppers are equipped with leak-proof double opening doors to prevent even tiny items from slipping through. Next, the multihead’s built-in microprocessor takes just a fraction of a second to calculate the combination of weigh hoppers that comes closest to the target weight. The weigher also features a counting function. Using the average individual product weight as a basis, the software calculates the required number of pieces in the box.

The selected weigh hoppers then transfer each correct weight to a timing hopper and via a custom-made filling system into the cardboard boxes. Guide plates in the weigher’s discharge chute speed up the process by preventing the hardware from getting stuck and churned around. The distribution unit underneath the discharge chute was specially designed by Ishida for this application. Two following heads fill two cardboard boxes simultaneously. The filling system can be fitted with seven different sets of funnels to suit the various product and box sizes.

WLC Würth-Logistik is also benefitting from the easy-clean design of the CCW-RVE. When handling metal objects, metallic dust accumulates on the contact surfaces, creating an oily film of dirt that can magnetise the products. This is why regular and thorough wet-cleaning is so important. All of the weigher’s product-bearing contact parts can be removed and replaced without the need for tools, which means that cleaning can be completed within just half an hour. The design, in accordance with protection rating IP54, allows the Ishida weigher to be washed down with running water. Rapid cleaning and intuitive weigher operation ensure a high degree of availability.

For WLC Würth-Logistik, the new weighing and filling solution is already paying off. “The entire concept behind the Ishida multihead weigher is well thought out and works brilliantly. Our productivity is at 97%, which is extremely high,” says Ingo Frank. The company calculates that the investment will pay for itself in no more than five years.

The new multihead weigher will also open up further potential for WLC Würth-Logistik to optimise its processes because the CCW-RVE model is compatible with Industry 4.0 technology. For performance monitoring purposes, the web-based software Ishida Sentinel allows the specially pre-configured weigher to be connected to the Ishida service centre, where production data is monitored and evaluated in real time. Daily reports can be generated showing trends, batch information and statistics, and faults or drops in performance are identified early on with most rectified remotely.